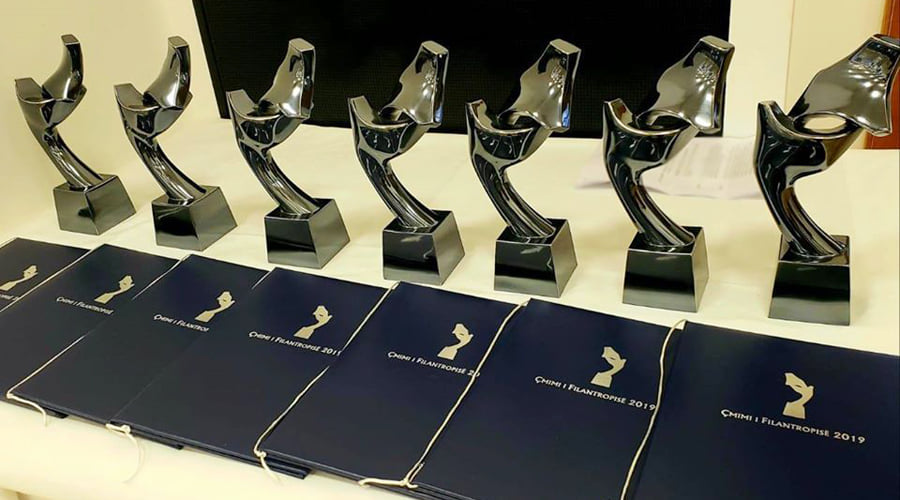 Representatives from the Agency for  Support Civil Society (ASCS) participated in the announcement ceremony of the winner of the competition “Philanthropy Award 2019”, organized by Partners Albania, which was held at the Hotel Rogner.

The award is an appreciation to individuals and companies active in supporting social causes in Albania during 2019.

Participants in the ceremony were also personalities from the Albanian government, members of the Albanian Parliament, the diplomatic corps accredited in Albania, international institutions and donor agencies, representatives of the business sector, the non-profit and the media.

The Award for the National Level Award was given to SIGAL UNIQA Group AUSTRIA with the motivation: For commitment and wide contribution in health, education, environment, art, sports and financial education in the field of insurance, where are distinguished: Mobile Medical Clinic nationwide, the reconstruction of the United High School “Matosh UKA” in Fierza, Tropoja and the Sports Palace in Përmet, as well as the creation of the Club “Art and Culture” available to all citizens of Durres. The award was given to Mr. Avni Ponari, General Manager of SIGAL UNIQA Group Austria, by Mrs. Anila Denaj, Minister of Finance and Economy.

The Local Level Award was given to Mrizi i Zanave Company, with the motivation: For the contribution given to the promotion and development of the traditional values ​​of the Fishta area, Lezha, turning it into a tourist attraction and culinary destination strongly supported by the development of household and employment of area residents. The award was given to Mr. Anton Prenga and Mr. Altin Prenga by Mr. Silvio Pedrazzi, Chief Executive Officer of Intesa Sanpaolo Bank Albania.

The Individual Contribution Award was awarded to Ms. Suela Bala, motivated: For the initiative of organizing the “Mobile Library”, as an educational platform and an integrative window for children and youth through the book in the municipality of Lezha, creating a successful model that turned into a comprehensive movement in all over the country. The award was submitted by Sh.T. Mr. Luigi Soreca, Ambassador of the European Union to Albania.

The Pioneer of Philanthropy Award was given to Mr. Hamza Rama (after his death), with motivation: For the generous help and valuable contribution in alleviating poverty and improving the health conditions of citizens and families in need in the city of Lezha and surrounding villages, as well as for the financial support of the sports club Bardhyli ”, Of Lezha. The award was presented by Mrs. Mira Rakacolli, Vol. Minister of Health and Social Protection. The award was withdrawn by Mr. Irfan Rama, son of Mr. Hamza Rama.

The Citizen Engagement Acknowledgment Award was presented to Ms. Delina Fico, by Mrs. Marinela Jazoj, Executive Director of the Association of Foreign Investors in Albania and Honorary Consul of Norway, with motivation: For the valuable contribution to the protection of human rights and various social causes in the country, especially for the protection of women’s rights and girls and the promotion of gender equality in Albanian society.

A special award was given to Mr. Arben Cara with motivation: For performing with heroism and maximum devotion the task of firefighter in the search and rescue efforts of lives affected by the tragedy of the earthquake of November 26, 2019, putting in the foreground the mission of the profession even in the most extreme conditions of personal circumstances. ”

Special Award was awarded to the Municipality of Prizren, Mr. Mytaher Haskuka, Mayor of Prizren with motivation: For the generous and unconditional assistance in receiving and housing Albanian citizens affected by the tragedy of the earthquake of November 26, 2019, part of the extraordinary support and solidarity of the people and institutions of Kosovo.

This ceremony was scheduled to take place on November 26, 2019, but due to the earthquake struck on February 7, 2020.